Please join me at Kootenay Gallery In Castlegar on April 15 at 7pm for a wonderful evening of poetry along with esteemed poets, Linda Crosfield and Susan Andrews Grace. Thanks to League of Canadian Poets for their support.

Excited to be interviewed by CBC radio’s  lovely and talented Sheryl MacKay on the weekend of February 25. Date TBA.

I’m delighted to be on the Literary Press Group’s Top 10 booklist! 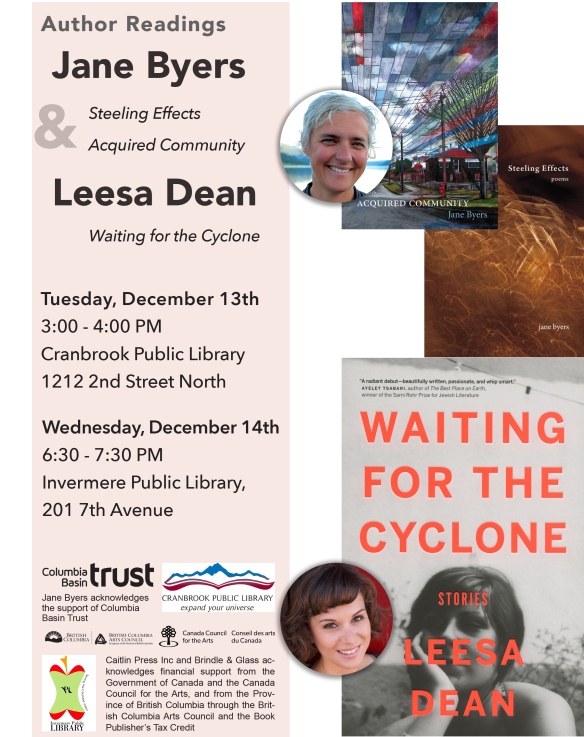 Frigid temperatures and warm audiences greeted us in Invermere and Cranbrook on my December book tour. Thanks to CKCA for the touring grant that had me reading in Golden, Revelstoke and Creston in 2014 and with Leesa Dean for the last two dates in December 2016. Thanks to the warm audiences at both Cranbrook and Invermere Public Libraries and to the staff at Best Western in Invermere who jump-started the frozen battery to get us out of there. Shout out to the enthusiastic David Thompson Secondary School English students who attended our writing workshop as well on this trip as well.

Jane’s first book was Steeling Effects. She has had poems, essays and short fiction published in a number of  books and literary magazines in Canada, and is a recipient of the Richard Carver Award for Emerging Writers.

Buy ACQUIRED COMMUNITY in Nelson at Otter Books, in Canada at Caitlin Press website or at Amazon.com or Amazon.ca

Writer Jane Byers’s latest collection, Acquired Community, is coming out this fall with publisher Caitlin Press. Byers’s work can be seen all over the city, and this self-described writer and poet has no intention of slowing down any time soon. Byers’s new collection is due out in September and I had the honour of sitting down with her to talk about her new poems—beautifully titled, personal, at times funny, and always introspective. Byers talked about her work in various genres, her poem popping up here and there in the city of Vancouver, her musical interests, and what she reads when she isn’t writing, which seems to be quite a bit these days.

Acquired Community’s meaning is twofold for me. One—the sense that we acquire friends and lovers and form or flock to institutions and they become our community. It is not that we are born into community. It is one step beyond the notion of chosen family. It’s not always chosen. It’s circumstance—epidemic, war, trauma—and we find ourselves and each other. Acquired as in acquired immune deficiency syndrome. The AIDS epidemic shaped so much, transformed our community, for better and worse. It is a reflection on community, how ours developed and how my own personal community developed.

It’s always tough to say how long; in a sense, [I’ve worked on it] since coming out in my early twenties. I wrote some of the parade poems first and then decided I would have a parade suite of poems. I saw the documentary We Were Here and it inspired me to look back in poems, as that documentary did in film. We have the benefit of distance and time to reflect now. We know how it turns out. We know that gay men didn’t get wiped out, because we didn’t know whether they all would before 1995 or so. It was also an opportunity to reflect on where I was at, to reconcile my own inward gaze because coming out was difficult, but juxtapose the epidemic and the impact in many of the poems. I worked on the Michael Lynch poems in a fever of ten- to twelve-hour days while at a residency at Banff Centre for the Arts then had the benefit of working with my mentor, Sharon McCartney, over twenty weeks while completing the Wired writing program at home. I came back to the collection many times, shelved parts of it so I could revise with fresh eyes. I workshopped it over years with my poetry group.

Thank you. The Michael Lynch poems are really an imagined conversation between the ghost of Michael Lynch and the modern-day benefactor of his LGBT scholarship at U of T, a twenty-something gay man. So many conversations were cut short, so many elders lost, and now we don’t have the benefit of the ongoing conversation with those who died. It’s a conversation continued that Michael started. He is a standout, accomplishing so much in his shortened life—AIDS Action Now, the scholarship, the AIDS memorial, being a Whitman scholar, an author, a professor, teaching the first gay studies class at U of T. And let’s not forget his seminal pieces in The Body Politic (predecessor of Xtra). And yet, he is also one of Mark Doty’s mackerels, selfless, which is the price of gleaming. Lynch urged us to “make dying gay.” His yellow kitchen gloves were used in protest. Now we have the benefit of time and distance. We don’t have to work so hard to be acknowledged.

I need silence to create poems. I can revise with instrumental music but not much else. I have to be able to hear the “music” in my head. I try and write before my kids and wife wake up. I get up early and write before any other language infiltrates my day. It helps me hear the music of a poem better. I do better when immersed, as one would be on a retreat, but time constraints of raising kids, working, and being a half-decent partner make me very productive during my morning time and a few stolen days here and there. I do write first drafts with pen and paper and only revise on computer. Sometimes lines come to me when I’m walking my dog or riding my bike, usually when I’m solo.

It’s an excellent opportunity to introduce people to poetry who don’t normally read it or reacquaint those intimidated by high school poetry. I hope to show people that poetry can be accessible. Poetry in Transit used to transform my commute in Toronto: to be carried away from the mundane amidst a crowded streetcar was magical and speaks to the power of poetry.

I wrote a hockey poem and noticed a call for submissions for The Canadian Journal of Hockey Literature. I was delighted such a journal exists. I grew up playing shinny and watching Hockey Night in Canada with my mom and brothers on Saturday nights. We were Leafs fans.  I don’t follow it much anymore. I’m appalled at the violence, actually. Now I’m a reluctant hockey mom. I still love playing shinny though.

Sometimes my poetry group offers wonderful titles. Often I pick titles from lines in the poem, usually the essence of the poem. “Keen” is a good example. I considered it for the title of the collection; however, too many people think of shoes and nobody is really thinking of the archaic meaning that I had in mind which is more related to lament.

I was interested in a form, that of a dialogue poem, after having written one in my last collection. Many of the poems in this collection are dialogue poems. Both collections are primarily interested in resilience. Steeling Effectswas focused on individual resilience and Acquired Community in a community’s resilience. I maybe had to give myself some empathy in the first collection, i.e. the birth poems, in order to then turn my gaze towards a whole community. I could have never written an imaginary conversation between two gay men, one of them dead, before now. It was an act of empathy and imagination I wasn’t ready for until now.

Sometimes I listened to iconic gay pride songs such as “Rise Up” by the Parachute Club, or “YMCA” by the Village People or “High School Confidential” by Carol Pope or “I Will Survive” just to get me into the zone. It took me back to Toronto Pride and clubs.

I had this wonderful high school English teacher, James Kelway at Frontenac Secondary School in Kingston, ON. I took his English writing course because I was in his English lit course and loved it. I would have taken anything he taught and I was a total science geek. I started to write poems that helped me understand the earliest glimmers of coming out. They were bad, teenage angst poems but they were the first expressions of coming out before I was out to myself.